The Fast Fourier Transform (FFT) is fundamental to digital signal processing as it enables the (circular) convolution of two signals of length \(n\) to be computed in \(\mathcal{O}(n \log n)\) time. Different algorithms must be used for different \(n\) in order to achieve this asymptotic bound (see this paper on the design of FFTW for more details). Non-periodic convolutions can be computed by simply taking a subset of the output elements. However, in this scenario, it might be possible to use a faster algorithm by considering larger circular convolutions than necessary, padding the signals with arbitrary values. This article will investigate how to find a somewhat-optimal size.

Next power of a few small primes

From this we can see that the simple heuristic of rounding up to the next power of 2 gives a big improvement for some sizes, but can be up to twice as slow. Using the next power of 2, 3, 5 and 7 is often but not always better than the next power of 2. It should be possible to achieve the staircase-like curve which lower-bounds this set of points. However, we would like to do so without measuring the running time for every size.

This was found using depth-first search in a tree whose edges each correspond to incrementing one of \(\{a, b, c, d\}\). 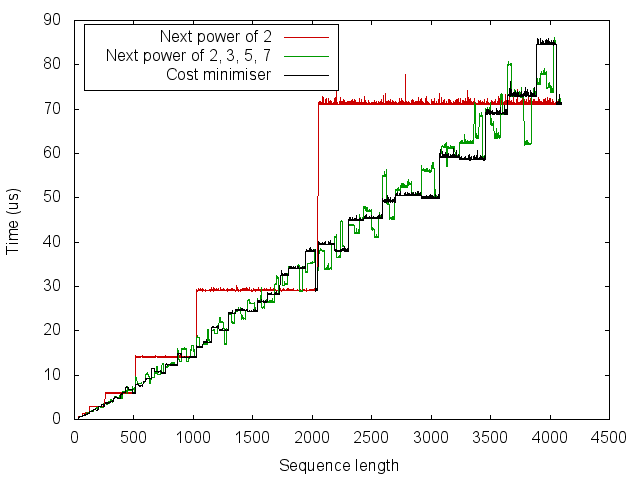